Celebrity Author Barry Donadio that found fame after writing his book "TWA Flight 800 First Responder Witness Account", is now being featured on Goodreads website. The website is a place for readers to find books that interest them and research reviews. They can also use the site to buy from multiple different book distributers.
Barry Donadio released his book on September 16th 2013 after keeping his witness account confidential for 17 years. Donadio was one of the First Responders that answered the call to assist the downed TWA Flight 800 on July 17th 1996. He served with the East Moriches Community Ambulance in New York as an Emergency Medical Technician. Since then, he has become an advocate for those affected by the crash and all First Responders.
On July 17th 2016, on the 20th anniversary of the crash, Mr. Donadio arranged for access to the East Moriches Coast Guard Station for some of the families of the victims of the flight. The East Moriches Coast Guard Station is where rescue operations originated on the night of the tragedy.
Mr. Donadio said " I am ecstatic that a fine company (Goodreads) is promoting my book. It is not an easy accomplishment and a highlight in my life." " I appreciate the overwhelming interest the public has shown in my book."
Posted by News Covering Barry Donadio at 9:33 AM No comments:

Barry Donadio Calls For Positive Acts To Bring Nation Together 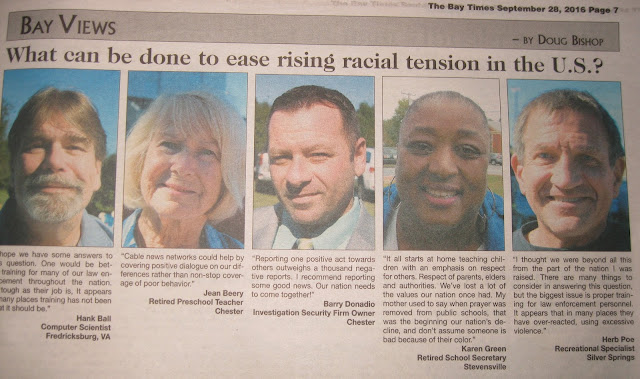 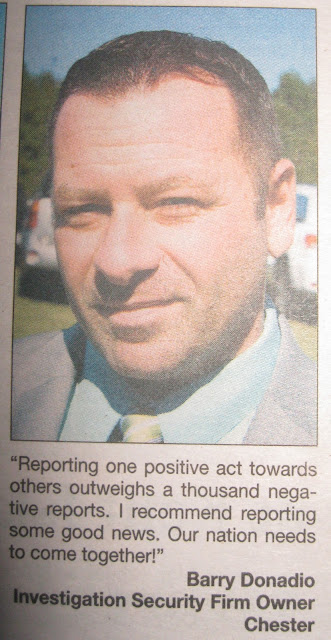 On September 28th 2016, Barry Donadio was interviewed by The Bay Times Newspaper of Stevensville, Maryland. When Reporter Doug Bishop asked him what could be done to ease rising tension in the U.S., Donadio replied " Doing one positive act towards others outweighs a thousand negative acts. "Barry Donadio is no stranger to racial tensions. He served in various law enforcement positions in New York City, Long Island, Maryland, and in the military. His experience in law enforcement stems as far back to 1989. Now, he is the CEO of a high end private security firm which responded to the recent riots in Baltimore.

In 2014, he was elected to the Queen Anne's County Republican Central Committee in Maryland. There, he lead an effort to bring minorities to the Republican party and break the label that this party is anti-minority.

Immediately after Donald Trump was elected to President of the United States, Barry Donadio is again calling for positive acts to dampen any division between races in the country.

"Our country is heading for a massive period of transition. Now is the time for all of us to come together."

"I am calling on all Americans to perform acts of good towards one another regardless of race or political affiliation." " It is time for us to unite under the red, white and blue colors of the United States flag and to move forward together as a nation."
Posted by News Covering Barry Donadio at 2:52 PM No comments: 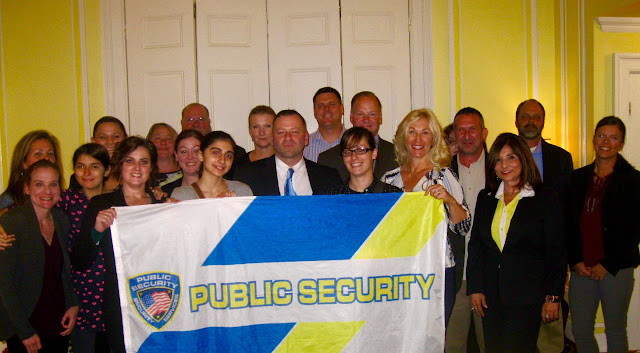 Barry Donadio's private security and investigation firm "Public Security LLC", put 65 Marylanders to work this month. Most were Eastern Shore Marylanders hired to work the "10K Over The Bay Bridge Run" that took place on November 6th 2016. The new staff fetched a high hourly rate of pay as Public Security LLC decided that paying Marylanders a high wage was more important then their profit according to their business strategy. After working the event, the newly hired Marylanders were afforded further employment opportunities with Public Security LLC on a part-time basis. Those positions are expected to lead to full time positions.
The new staff working for Public Security LLC are happy with the new opportunity. Many feel it will open more doors for them. Kristen Brook, a newly hired Event Staff, thanked the company President Barry Donadio for the allowing all of them to be apart of the Bridge Race. Deborah Thornton-Lee expressed how proud she was to work for Public Security LLC at the event.
Barry Donadio stated that he focused on recruiting residents of Queen Anne's County, so they could display Eastern Shore pride in their services to his clients. He went on to say; " My choice to use them was validated by their excellent performance during the Bay Bridge Run event." " I never doubted the abilities of the predominantly female Event Staff to provide the perfect result that they did." "This wonderful new staff are from all walks of life including some single mothers with good leadership skills."
Mr. Donadio said he would continue to open doors of opportunities for Marylanders seeking employment with his firm. Mr. Donadio, who is also certified by the Maryland State Police to instruct in firearms, stated that he will provide free handgun qualification license certifications to all of his new staff. Anyone interested in opportunities may visit the company website to submit a resume.

Posted by News Covering Barry Donadio at 4:50 PM No comments: