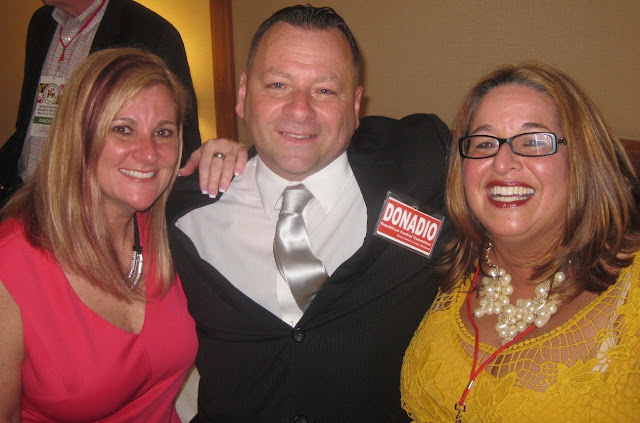 In January 2017, Barry Donadio was appointed as the Sergeant at Arms of the Maryland Republican Party.

The Honorable Dirk Haire, who is the newly elected Chair of the Maryland Republican Party and campaign counsel to Maryland Governor Larry Hogan appointed Barry Donadio.
Mr. Donadio will serve a 2 year term as Sergeant at Arms and be responsible for maintaining order during MDGOP conventions. Barry Donadio was already handling protective security details for Republican Party through his firm Public Security LLC.
When the MDGOP needed executive protection for their guest Alevda King, they called on Barry Donadio and the Private Detectives from his firm to carry out the task. Alveda King is a Republican, American Activist, Author and former State Representative for the 28th District in the Georgia House of Representatives. She is also the niece of Martin Luther King.
In 2014, Mr. Donadio was elected to the Queen Anne's County Republican Republican Central Committee in Maryland and is currently serving a four year term.
Since then, he endorsed Conservative Republicans like Nicolee Ambrose (The RNC Committeewoman for Maryland. On April 27th 2016, Barry Donadio also publicly endorsed David Bossie for RNC Maryland National Committeeman. In September 2016, Mr. Bossie was subsequently appointed as a Deputy Campaign Manager by United States President Donald J. Trump.
Barry Donadio stated " I would like to personally thank MDGOP Chairman Dirk Haire for appointing me as Sergeant at Arms for the MDGOP. Like Chairman Haire, I take my position with the MDGOP seriously. I will serve the Republican Party with professionalism, fairness and impartiality regarding my protective duties. "
Mr. Donadio also stated "When I was appointed as Sergeant at Arms, I inherited over 200 protectees consisting of the appointed and elected officers of the Maryland Republican Party. These protectees consist of all the members of the Republican Central Committees from each county in Maryland. Included in that group are also Republican Candidates for office and visiting dignitaries. It is a great honor for me to serve them all. As Sergeant at Arms of the MDGOP, I will be always be available to my protectees even when the convention is not in session. When needed, I will oversee other tasks for the MDGOP such as: executive protection, security, Police liaison duties, impartial political negotiator, and be a dispute resolution mediator for opponent political candidates."
Barry Donadio is a former member of the U.S. Secret Service that served at the White House during the Bush and Obama administrations. He is also a Military War Veteran that served in multiple Middle Eastern war zones during his career.
Posted by News Covering Barry Donadio at 3:15 PM No comments:

Barry Donadio, formerly of the U.S. Secret Service and current President of Public Security LLC is now teaching the use of Tactical Shotguns to Maryland residents.
The training is designed for Private Security Officers, Private Detectives, and Security Managers. Private Citizens may also take the training. To training focuses on Security Management expectations of Security Professionals issued shotguns for the performance of their protective duties. Citizens can also benefit from the training because there is approximately 4 hours of classroom instruction on tactical shotguns followed by shooting multiple live rounds.
Barry Donadio has a wide range of knowledge and experience using tactical weapons gain from his honorable career in the military and the U.S. Secret Service. He also served in multiple Middle Eastern war zones.
For other upcoming classes, check Barry Donadio's company page at publicsecurity.us or the Public Security War Fighting Facebook page.
Posted by News Covering Barry Donadio at 11:25 AM No comments: